I’m here with a new post, this time I decided to try something organic, so I did a Tree and a Mushroom! On the previous entries I did a wooden crate, an explosive barrel and a red curtain and lastly a sword and shield.

For the tree, I decided to make it somewhat minimalistic, so I made the crown out of round shapes.

After making the circle like shapes I had to add a few semi circles in some places to make the crown look like one big round thing.

Now for the coloring I wanted to try something that resembles water coloring. Using the transparent brush, I applied the same technique I used on the explosive barrel, overlaying the same color multiple times to get a lighting effect. Ended up working better than I expected! 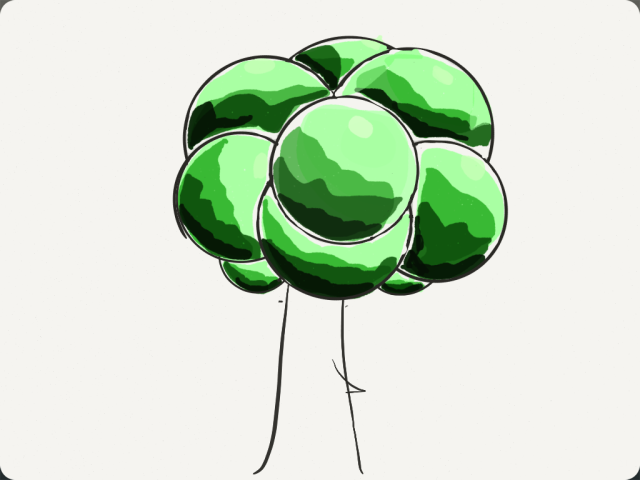 And for the trunk I tried the same technique, but it was a little harder to make it work. I still really liked the result though. Even the white spaces near the edges, which at first I was going to get rid off, make it look cool, I don’t know, I like the style. =) 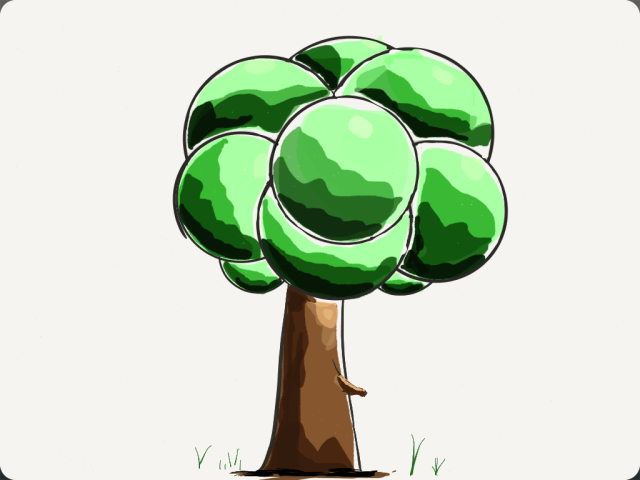 Now for the Mushroom! I tried something different for the shadows here,  in addition to the transparent overlay, I used a thin pencil-like brush in the places where the shadows should be darker. This one was really fun to do! Also, making it viewed from below was interesting, and really helpful to practice more with shadows and perspective!

Now as  a bonus I wanted to show another drawing, that I made last year for my game Sheep Dreams Are Made of This. It’s very basic, but it was one of my first tries, and it was also something that I used in the game (for a while). The game has a weird hand drawn style and a somewhat dirty trace, so it wasn’t that hard to make something that would be acceptable. What I needed was a set of static doors, for when the character exists the level. I looked at some pictures to get the idea of how to make the perspective work.

This is how they looked in the end, very simple of course.

And this is what they looked like in the game:

Of course later on the real artist made some good looking doors (and platforms), and the game now looks a lot better! If you want to check it out I would really appreciate it, it’s free on iOS, Android and Windows Phone =)

That’s it for this week! Next time I’ll make a Hand Axe and a Bomb! I’ll also share some more elements I made for Sheep Dreams, probably UI stuff, that are still in the game today. 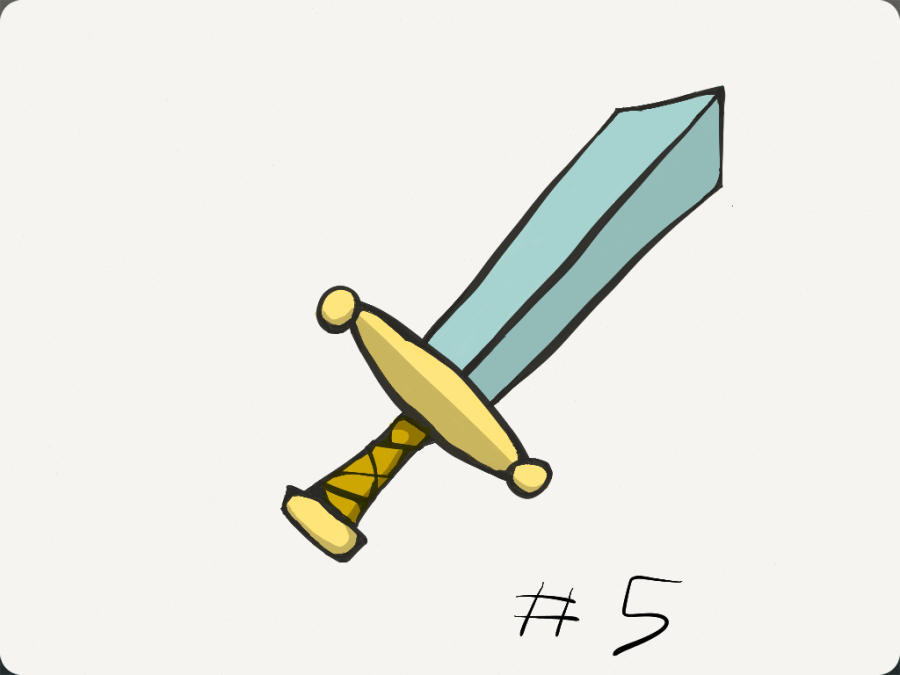 This is the third post on the series where I, as a programmer, share my experience of trying to learn the basics of drawing. On the first post I made a 2d wooden crate, and was pretty happy with the result!

On the second post, I made an explosive barrel that turned out ok and also tried to make a curtain that did not work at all.

This week I’m doing 2 things someone suggested on a comment: a Sword and a Shield!

I wanted to do something that looked like those templar shields. Overall I was happy about how it turned out, but some things still bother me: 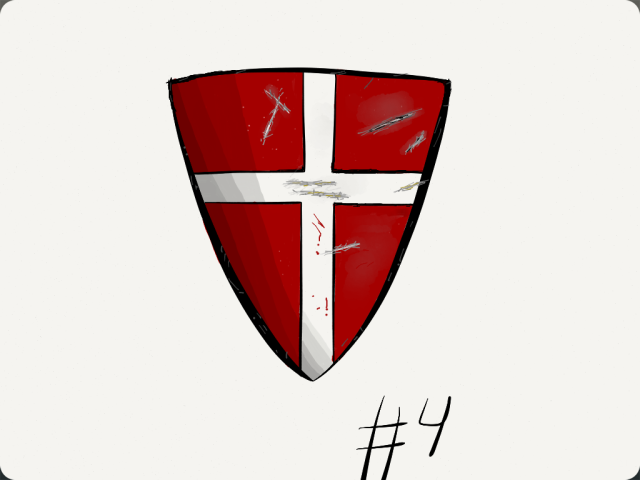 Now, the Sword! It took me a while to get the shape right, specially for the grip and the pommel. This is the main brush I use to make the outline of the drawings, I like it a lot because it makes thick lines but it’s not always the same width.

Now for the coloring! I used a blue-ish color for the blade because it looks better than plain gray. Maybe I should have added some kind of shadow as well.

The guard has shadows, the ones inside the circles look ok, but the one in the center looks kinda weird, maybe because it’s a straight line?

The grip is the part I am happy about, I think it turned out really nice, even  the shadows worked well!

Once again, if you look closely on the edges you’ll see the same problem I had with the shield. Someone on /r/gamedev pointed this on my previous drawings and suggested this website called Draw a Box, where they have some really neat tutorials on the basics of drawing. I have started looking into them and it’s really interesting, right at the beginning they talk about how important is the way you should move your arm (and not only your wrist), it’s fascinating, I really recommend you check it out if you want to learn how to draw.

For the next week  I’m changing up a bit and I’m drawing organic things! A Mushroom and a Tree, probably =)

If you have any requests or suggestions please leave a comment, every post I get some cool tips from artists and suggestions of tutorials and tools, and also from programmers that either are learning or already have learned how to draw.

There was this programmer who learned digital painting for 1 year and made this game, it looks really awesome and is a great incentive!

See you next time!

This is the second post on the series where I, as a programmer, share my experience of trying to learn the basics of drawing. On the first post I made a 2d wooden crate, and was pretty happy with the result!

This week I have 2 drawings, for the first one I’m continuing the theme of “Common objects you find in most video games”, it’s red and it explodes when you shoot it. Yep, an explosive barrel! 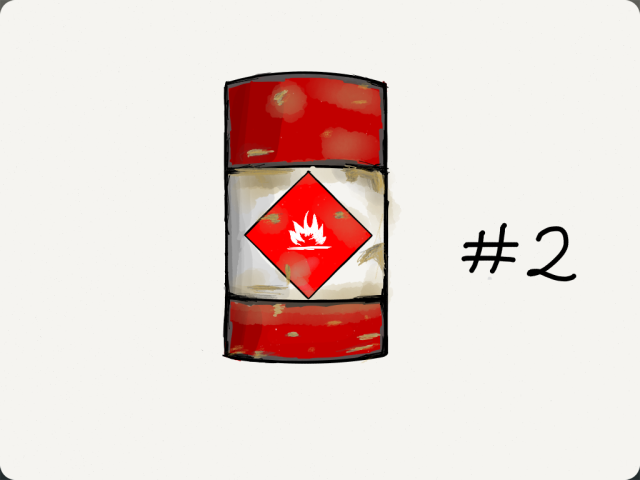 This one was kinda tricky because even though it’s a 2d drawing the object is round, so to give that effect I made it round on the top end on the bottom and then tried to apply some shadows.

To make the shadow effect I just used a brush that has transparency (with the same color of the background color), and used more brushstrokes on the parts that were supposed to be darker. Later on I used a watercolor brush to give the barrel some stains, and also some gray and brown details to make it look old and rusty. It’s far from perfect but I think it turned out ok =)

Now for the second drawing I tried something different and more challenging.

I wanted to try something else using shadows, so I decided to draw a red curtain, one of those fancy heavy ones you either find in a century old mansion or on a David Lynch movie.

Now the shadows here are pretty tricky and took me a lot of trial and error to make it even resemble a curtain. Turns out fabric is really hard to represent.

The transparent brush I used in the barrel did not work well here so I tried something different, initially I used a darker tone of red to draw the hard shadows, but it soon became apparent that I would need more than that, I needed more than one intensity of shadow. 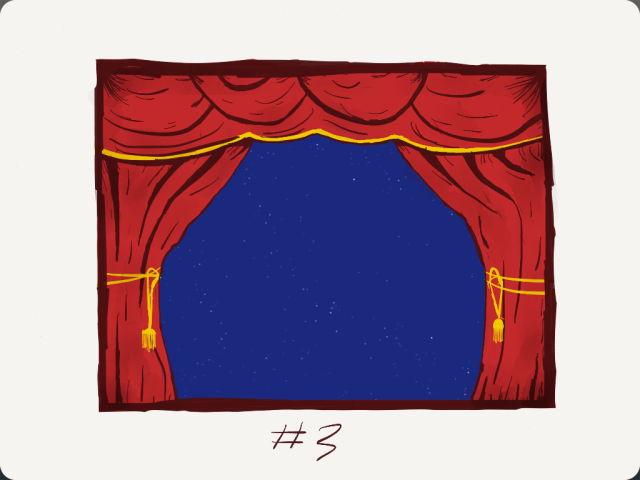 This is the finished curtain, I tried alternating between thick and thin lines for the shadows, and later on I added some watercolor effects on the edges and other places that should be darker.  I wasn’t very happy with this one, maybe I should try it again when I have more experience.

That’s it for this post, hope you guys liked it, I got a ton of great feedback last time, specially from some professional artist and from some other programmers that also learned how to draw. It will take some time for their feedback to start showing on my drawings since I had a few os these queued up.

I will try to take more screenshots while I draw since I think it might be interesting to see how the drawing itself progresses before it is finished.

As always, if you have any suggestions let me know, really appreciate all the feedback!

Next time I’ll do a Sword and a Shield =D 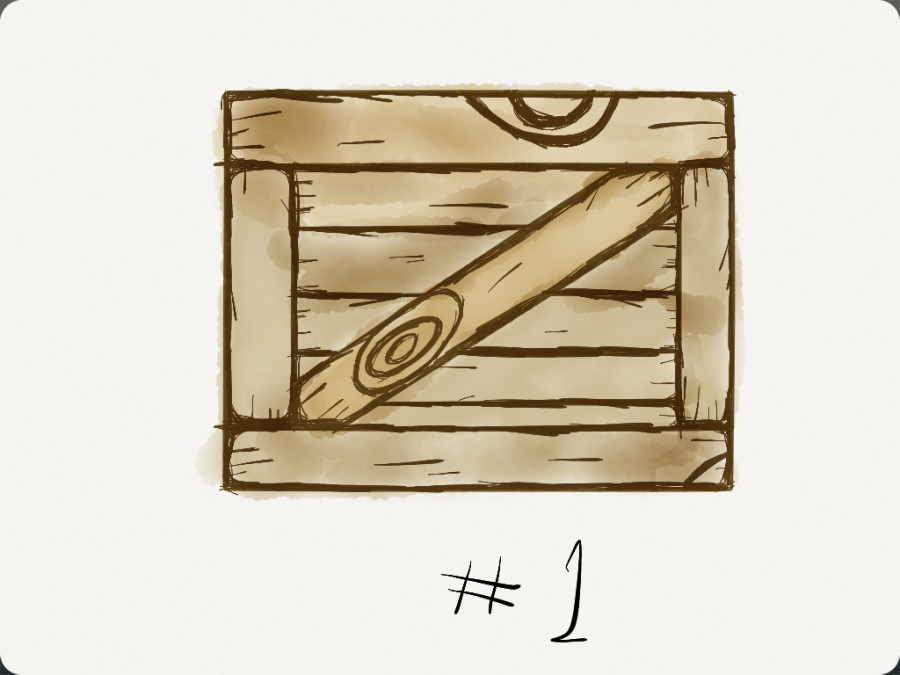 I don’t know how to draw, I always wanted to, but I was never very good at it. Granted I never really tried that hard either so I should’t complain.

No I’m a programmer and game designer so that doesn’t really matter, I have a very talented friend (Alberto) who works with me and does all the art for our games.

But every now and then I get the urge to try somehting myself, if you work with games you probably know what I’m talking about, specially if you’re one of those guys that make everything in your game (developer of Stardew Valley comes to mind).

So a while ago I found this app called Paper, on iOS, and I decided to try it out. The app is really well designed and easy to use, every line I drew seemed like it could become something beautiful.

In order to have goal in mind and to practice I decided to draw a series of images themed around games, so what would be the most common object to appear on video games? The first thing that came to my mind was a wooden crate, it was also easy to draw. And maybe I would do a series of blog posts about it, it took a while but here it is =)

I decided to stick to 2d for the time being, because hey, I told you I don’t know how to draw, bringing perspective in is a whole other beast.

What I really like about the lines in Paper is that they are not even and perfect, they really give you the impression that they were handmade.

In order to give the details to the crate I tried to use a somewhat scrawled trace.

This is what it looked like after I finished.

I tried using some watercolor effects to make it look more like wood but that did not work exactly how I expected. That said I was very satisfied with the results and decided to keep the experiment going.

If you have any tips on how I can improve my poor drawing skills, please let me know! Also if you have any suggestion on what I should draw or even questions regarding the process, get in touch on the comments or via email: robsonsiebel at gmail.com 🙂